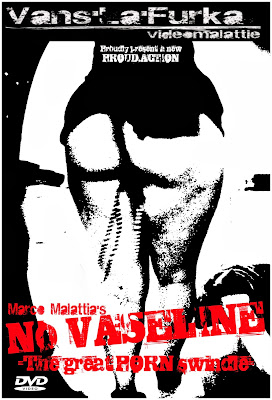 Marco Malattia, owner of the independent pornography label „VANS LA FURKA VIDEOMALATTIE“ and main actor in all of its productions, has been producing violent and oftentimes artistic underground sleaze for quite some time now. “An Experiment in Shit”, a collaboration with Power Electronics/Death Industrial project RxAxPxE entitled “Adoration of Decline” and a few photo sets are some of Malattia’s works that have been circulated in underground pornography and extreme music circles. His newest film “No Vaseline – The Great Porn Swindle” features the talents of Lexa Zerdov and Helga Retard and holds all the attributes that have made Malattia’s earlier output so interesting: shameless, unrelenting pornography, perversion, an artistically stunning presentation and satanic imagery. 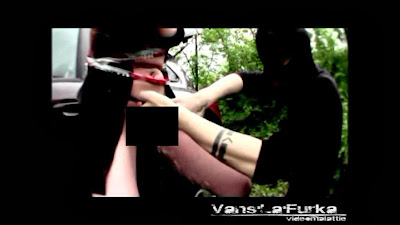 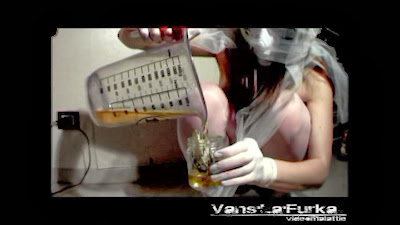 What really makes this special is the perversion. Malattia urinates into stretched open rectums, penetrates feces covered orifices and drowns women in bath water. One incredibly well-crafted scene shows two of the actresses performing fellatio on Malattia when suddenly one of them starts to vomit on his erect penis. The presentation of paraphilic acts regarding bodily fluids and excrement is extremely well done and one of the films best features. Golden showers are administered, urine is directed into cups and drunk and one of this reviewer’s personal favourites shows a young madam throwing up into the gaping genitalia of another woman. Malattia pulls no punches and succeeds in creating pleasurable, cruel perversions that never feel staged or pretentious. Furthermore, the diverse nature of the scenes creates a lot of variety and a feeling of constant progress and action, which makes the scenes appear even more brutal and harsh. 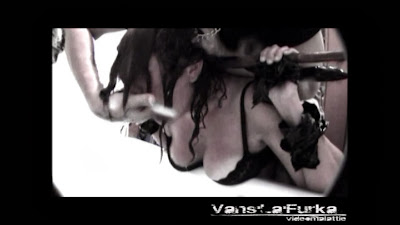 Despite its hardcore pornographic nature, “No Vaseline” has some very strong artistic qualities. The way the images are processed should remind some of the more attentive viewers of the films of one Lucifer Valentine, same goes for the way pornography and satanic imagery are fused together. Malattia is, however, in no means a copycat, “No Vaseline” has its own identity and is in no means a third rate Vomit Gore rip-off. The artistic scenes intensify the effect the rough scenes have on the viewer, making “No Vaseline” look like a glimpse into a depraved, disturbed mind. The harsh noise soundtrack, which Malattia created under the moniker ZeroGravityToilet, plays out nicely and works well with the visuals. 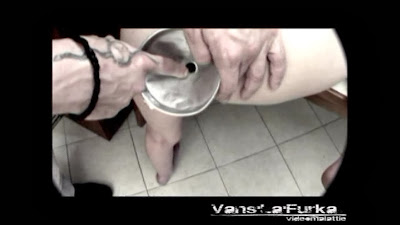